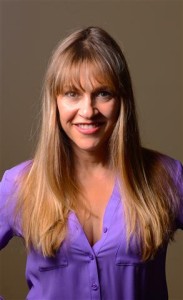 She is a award-winning voiceover talent with global credits, as well as Union affiliation. (Sag/Aftra)

Elyssa most known as the voice that changed the way we look at internet speed; she introduced high speed to NYC with multiple award-winning spots.

Her voice can be heard representing Food First,  the first food channel of India, & the 2nd American voice to be heard on the air in the country of India.

She is a trained NYC actress with off-broadway credits, as well as national on-camera spots.

She has worked with important directors, the likes of Adolfo Doring & Brian Bently in NYC & Ben Bachar & Yishay Karney in Tlv.

Presently, you can find her onCamera hosting & guesting on the English website of Israel Hayom where she created her own show, "Hot, hiP & NOW". . . introducing the anglo audience to interesting Israelis on the cutting edge of fashion, art & technology.

When she's not in a studio & in front of a mic, you can find Elyssa avidly crossing the Mediterranean where she holds the position of "urban mermaid".